“We make too little of you, Lord, too often,” my coworker prayed. Our staff had been reading The Ten Commandments, and Exodus 20:7 had prompted his prayer:

“You shall not take the name of the Lord your God in vain, for the Lord will not hold him guiltless who takes his name in vain.”

Saint Patrick’s Day is a day when our culture makes much revelry, making too little of our Lord. Even Christians make too little of our Lord by failing to revere him, forgetting to acknowledge him and thoughtlessly making casual statements about him. But the holiday’s namesake was a man who, by his own Confession, delighted to revere the Lord. It’s a funny thing we’ve founded our worldly revelry in remembrance of his life, which gives quite the opposite impression. 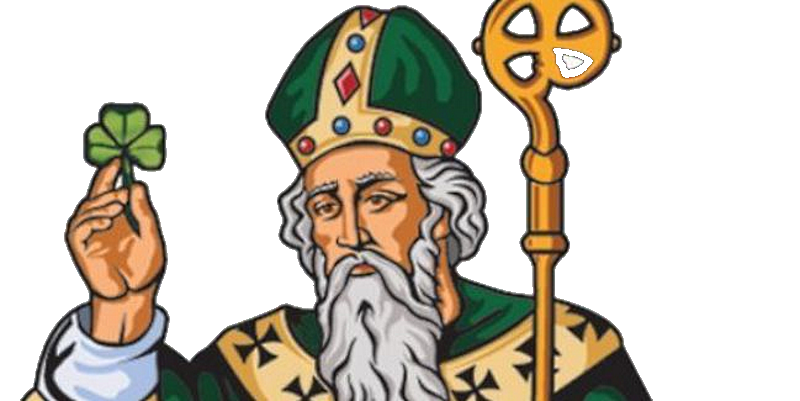 Who Was Saint Patrick?

Dr. Philip Freeman gives us a good introduction to this man:

The historical Patrick was not Irish at all, but a spoiled and rebellious young Roman citizen living a life of luxury in fifth-century Britain when he was suddenly kidnapped from his family’s estate as a teenager and sold into slavery across the sea in Ireland…He went to Ireland an atheist, but there heard what he believed was the voice of God.

Patrick escaped Ireland after six years, but returned to preach Christ to the people there. “He was a man of great insecurities who constantly wondered if he was really cut out for the task he had been given” (Freeman), which is clear as you read his confession.

How do we honor God’s name, rather than take it in vain, on Saint Patrick’s Day and every day?

Three Reasons We Should Care About Saint Patrick

Here are three ways Saint Patrick made much of God’s name by telling of his works—and three reasons Christians should care about him. He did this in his little book, “which Patrick, a sinner without learning, wrote in Ireland.” It was his confession before he died.

Saint Patrick writes in his confession:

…there is no other God, nor will there ever be, nor was there ever, except God the Father. He is the one who was not begotten, the one without a beginning, the one from whom all beginnings come, the one who holds all things in being—this is our teaching.

And his son, Jesus Christ, whom we testify has always been, since before the beginning of this age, with the father in a spiritual way. He was begotten in an indescribable way before every beginning. Everything we can see, and everything beyond our sight, was made through him. He became a human being; and, having overcome death, was welcomed to the heavens to the Father. The Father gave him all power over every being, both heavenly and earthly and beneath the earth.

Let every tongue confess that Jesus Christ, in whom we believe and whom we await to come back to us in the near future, is Lord and God. He is judge of the living and of the dead; he rewards every person according to their deeds. He has generously poured on us the Holy Spirit, the gift and promise of immortality, who makes believers and those who listen to be children of God and co-heirs with Christ…This is the one we acknowledge and adore—one God in a trinity of the sacred name.

We revere the Lord by confessing that Jesus Christ is Lord, and by living in obedience to him, not depending on our own efforts to be made more like him, but depending on the Spirit whom he has given to us. In this we honor the Father.

Will you revere the Lord by confessing that Jesus Christ is Lord and God, by repenting of your sins to him, the Judge, and by living by faith according to his commands through the help of the Holy Spirit?

In the Notes section following Saint Patrick’s 64-point confession, we find these words:

Patrick often quotes parts of the Bible directly. Even more frequently he uses phrases from the Bible as a normal part of his writing…To give every single possible allusion would make this translation far too unwieldy.

Reading Saint Patrick’s confession proves this note abundantly true. You feel as if every other sentence is a quote from Scripture—so much so that the editors thought it too daunting a task to include all the references. God’s Word had clearly taken root in this man’s heart and was highly regarded by him, “For out of the abundance of the heart the mouth speaks” (Matthew 12:4).

Not only was Scripture on his heart and tongue, but also prayer. He says:

I tended sheep every day, and I prayed frequently during the day. More and more the love of God increased, and my sense of awe before God. Faith grew, and my spirit was moved, so that in one day I would pray up to one hundred times, and at night perhaps the same. I even remained in the woods and on the mountain, and I would rise to pray before dawn in snow and ice and rain. I never felt the worse for it, and I never felt lazy—as I realize now, the Spirit was burning in me at that time.

Saint Patrick made prayer top priority, no doubt paired with the intake of Scripture. Why? It fueled his love for God, for “We love because he first loved us” (1 John 4:19). To revere God is to love him by seeking him in prayer and wanting to know him through his Word.

Will you revere the Lord by prioritizing loving fellowship with him through his Word and prayer?

I commend my soul to my most faithful God. For him I perform the work of an ambassador, despite my less than noble condition.

But this I know for certain, that before I was brought low, I was like a stone lying deep in the mud. Then he who is powerful came and in his mercy pulled me out, and lifted me up and placed me on the very top of the wall. That is why I must shout aloud in return to the Lord for such great good deeds of his, here and now and forever, which the human mind cannot measure.

It is right to spread abroad the name of God faithfully and without fear, so that even after my death I may leave something of value to the many thousands of my brothers and sisters—the children whom I baptised in the Lord.

Saint Patrick confesses that he “never had any other reason for returning to that nation from which [he] had earlier escaped, except the gospel and God’s promises.” What would compel a man to return to a land where he was enslaved? Only a tale worth telling, worth eternity. For, “we believe in and adore the true sun, that is, Christ, who will never perish. Nor will they perish who do his will but they will abide forever just as Christ will abide forever.” “It is right to make known the gift of God and his eternal consolation.”

Christian, it’s right to “shout aloud” of what God has done for you! This gives him glory. It’s right to make known his free gift of salvation, available in Christ. Will you revere the Lord by telling others about the free gift of eternal life he offers through Jesus Christ, and how faith in Jesus has changed your life? Who will you talk to today?

Whether it’s among family or while sipping Shamrock shakes, make much of the Lord this Saint Patrick’s Day.