Today is a glorious day for all Brothers and Sisters in Christ Jesus as we celebrate the resurrection of our Lord and Savior realizing the forgiveness of our sins and His magnificent and unending Love for us.

As our story ended last Sunday, it was the Saturday after Jesus’ crucifixion where Nicodemus, a Pharisee who had followed Him, and Joseph of Arimathea, who had provided our Lord’s final resting place, attended to His body in the tomb.

Now it is Sunday, the third day after His death and we will begin our story in the early morning hours of this day when Mary Magdalene went to the tomb to anoint His body.

Today’s continuation of last week’s story, as we mentioned last week, can be found in Matthew 28, Mark 16, Luke 24 and John 20. Today, I would like to speak from John to share the events of this day with you.

I have written the entire chapter of John 20 below for those that will find us online but, just as last week, I will be paraphrasing a little as I take “snippets” from each of the other Gospels as well. 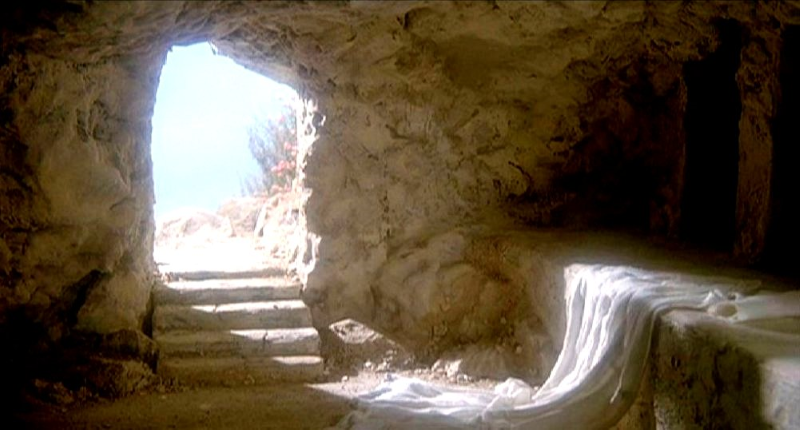 Early on the first day of the week, while it was still dark, Mary Magdalene went to the tomb and saw that the stone had been removed from the entrance.

Imagine Mary making her way to His tomb. Her eyes were red from crying over her Lord’s death. She was probably suffering from lack of sleep and extremely tired. When she first saw the stone rolled away, she probably assumed she was imagining all of this until she cleared the tears away.

She knew He was buried there, she watched them… and she saw the huge stone that had been rolled in front of His tomb. How difficult would this have been to move, even with multiple men of great strength. What could have been going through Mary’s mind as she witnessed this in the morning?

So she came running to Simon Peter and the other disciple, the one Jesus loved, and said, “They have taken the Lord out of the tomb, and we don’t know where they have put him!”

Keep in mind, the other Disciples had been in hiding, living in fear, for they thought they would be next and suffer the same fate as Jesus. On this day, only two Disciples would be found by Mary to spread this news.

So Peter and the other disciple started for the tomb. Both were running, but the other disciple outran Peter and reached the tomb first. He bent over and looked in at the strips of linen lying there but did not go in. Then Simon Peter came along behind him and went straight into the tomb. He saw the strips of linen lying there, as well as the cloth that had been wrapped around Jesus’ head. The cloth was still lying in its place, separate from the linen. Finally the other disciple, who had reached the tomb first, also went inside. He saw and believed. (They still did not understand from Scripture that Jesus had to rise from the dead.) Then the disciples went back to where they were staying.

If the Disciples or thieves had stolen His body, why would they risk taking the time to place the garments as they had been? How had they over-powered the armed Roman guards and rolled back the stone?

No, this was Jesus. His Father had raised Him up and He then took His time to show His Disciples that he wasn’t done yet! 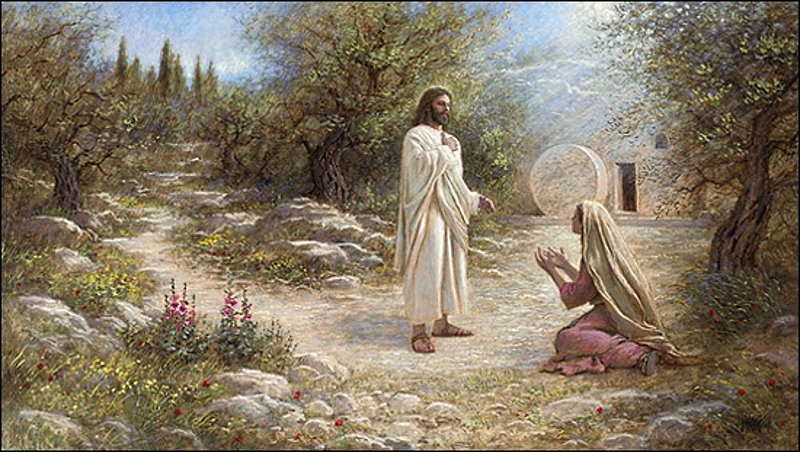 Now Mary stood outside the tomb crying. As she wept, she bent over to look into the tomb and saw two angels in white, seated where Jesus’ body had been, one at the head and the other at the foot.

They asked her, “Woman, why are you crying?”

“They have taken my Lord away,” she said, “and I don’t know where they have put him.” At this, she turned around and saw Jesus standing there, but she did not realize that it was Jesus.

He asked her, “Woman, why are you crying? Who is it you are looking for?”

Thinking he was the gardener, she said, “Sir, if you have carried him away, tell me where you have put him, and I will get him.”

She turned toward him and cried out in Aramaic, “Rabbi!” (which means “Teacher”).

Jesus said, “Do not hold on to me, for I have not yet ascended to the Father. Go instead to my brothers and tell them, ‘I am ascending to my Father and your Father, to my God and your God.’”

Again, I ask that you try and imagine her heart while seeing her Lord before her very eyes… alive and speaking to her. The utter joy within her must have been immense!

Mary Magdalene went to the disciples with the news: “I have seen the Lord!” And she told them that he had said these things to her.

Jesus Appears to His Disciples

On the evening of that first day of the week (which would have been that Sunday), when the disciples were together, with the doors locked for fear of the Jewish leaders, Jesus came and stood among them and said, “Peace be with you!” After he said this, he showed them his hands and side. The disciples were overjoyed when they saw the Lord.

Again Jesus said, “Peace be with you! As the Father has sent me, I am sending you.” And with that he breathed on them and said, “Receive the Holy Spirit. If you forgive anyone’s sins, their sins are forgiven; if you do not forgive them, they are not forgiven.” 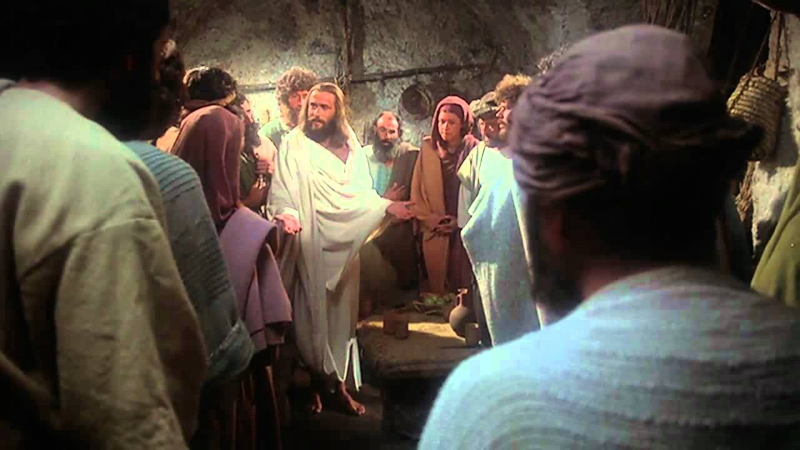 Now Thomas (also known as Didymus), one of the Twelve, was not with the disciples when Jesus came. So the other disciples told him, “We have seen the Lord!”

But he said to them, “Unless I see the nail marks in his hands and put my finger where the nails were, and put my hand into his side, I will not believe.”

Thomas was clearly bitter about the loss of His Lord. He Loved Him dearly and was suffering greatly from His passing. He simply couldn’t believe He had come back from the dead.

A week later his disciples were in the house again, and Thomas was with them. Though the doors were locked, Jesus came and stood among them and said, “Peace be with you!” Then he said to Thomas, “Put your finger here; see my hands. Reach out your hand and put it into my side. Stop doubting and believe.”

Thomas said to him, “My Lord and my God!”

Once more, could you imagine?! I can see Thomas dropping to his knees, tears flowing freely from his eyes, and kissing the feet of Jesus.

It is truly beyond my own imagination how I would feel if I ever had the chance to see one that I had Loved standing once more before me. The joy in Thomas must have been over-whelming!

John’s telling of this day ends on John 20:29 but goes on in verses 30-31 so he could explain to us why he wrote these things down… for us, to understand.

The Purpose of John’s Gospel

Jesus performed many other signs in the presence of his disciples, which are not recorded in this book. But these are written that you may believe that Jesus is the Messiah, the Son of God, and that by believing you may have life in his name.

What stands out to you regarding the resurrection of Jesus? With all the things the Gospels point out to us, how can we even begin to doubt the reality of this Blessed Event.

Here are just a few that stand out to me:

Please allow me just a few more minutes to read you this chapter from Isaiah and hear what it says. Then ask yourselves, was the Prophet talking about Jesus? If you’re anything like me, you will believe it is true.

Who has believed our message
and to whom has the arm of the Lord been revealed?
He grew up before him like a tender shoot,
and like a root out of dry ground.
He had no beauty or majesty to attract us to him,
nothing in his appearance that we should desire him.

He was despised and rejected by mankind,
a man of suffering, and familiar with pain.
Like one from whom people hide their faces
he was despised, and we held him in low esteem.

Surely he took up our pain
and bore our suffering,
yet we considered him punished by God,
stricken by him, and afflicted.
But he was pierced for our transgressions,
he was crushed for our iniquities;
the punishment that brought us peace was on him,
and by his wounds we are healed.
We all, like sheep, have gone astray,
each of us has turned to our own way;
and the Lord has laid on him
the iniquity of us all.

For he was cut off from the land of the living;
for the transgression of my people he was punished.[b]
He was assigned a grave with the wicked,
and with the rich in his death,
though he had done no violence,
nor was any deceit in his mouth.

Yet it was the Lord’s will to crush him and cause him to suffer,
and though the Lord makes his life an offering for sin,
he will see his offspring and prolong his days,
and the will of the Lord will prosper in his hand.
After he has suffered,
he will see the light of life and be satisfied;
by his knowledge my righteous servant will justify many,
and he will bear their iniquities.

Therefore I will give him a portion among the great,
and he will divide the spoils with the strong,
because he poured out his life unto death,
and was numbered with the transgressors.
For he bore the sin of many,
and made intercession for the transgressors.

The story from John, was the story of our Lord’s resurrection. This story from Isaiah was the foretelling of His sacrifice.

Jesus was truly our Lord and Savior and, without His sacrifice and great enduring Love for us, we would surely perish.

I believe, and Love Him with all my heart, mind, body and soul. I hope and pray that you share my sentiment.

Go with God; Believe; be good to one another; always stay humble; always be kind… God Bless!