The other night, as I was giving thanks to our Lord in Heaven for all that I have and all that is yet to come, my conversation with Him turned to Pastor Jerry. Having recently left this place and now beside his Lord and Savior, I couldn’t help but think about the influence this “Truly Godly Man” has had on my life and many others.

I had stumbled. I had fallen. Circumstances, or distractions (more appropriately), in my life had taken me away from my God. I had turned my back on Him and was living the life He would surely frown upon. My thoughts were only on me. I had felt that God had taken all that I loved and ripped the soul from my body as I knew I was undeserving of the kind of love Jesus Christ bestowed upon all of God’s children while He walked this earth and still, to this day, showers over all that believe in Him. No, not me. Surely, I was not in Christ’s favor.

One Summer Sunday morning, after spending the beginning of my day at the bar, a friend told me about a certain Pastor. This man was different. My friend told me he wasn’t like the Priests and Ministers that surround this area demanding your money to maintain their churches of granite and marble. No, this man, brought the word of God to all those wanting to hear. Where did he speak? Oddly enough… outside, under a tarp behind a local biker bar. There was no concern of how you dressed, how you looked, what your bad habits were or what your beliefs may have been at the time. This man, would bring you words from the True God in Heaven.

From the first morning, I sensed it. As Pastor Jerry’s voice roared out across the small congregation I sat among, God touched me. I took a sip from my beer, a drag from my cigarette and Pastor Jerry then said “it.” “God Loves You!” Right then and there, I knew he was speaking to me as his eyes peered over his glasses and into mine. Jerry had a message for me, from God.

I continued coming every Sunday morning as I wanted and, more appropriately, needed to hear God’s word. My strength was slowly returning to me and my heart was softening as Pastor Jerry’s readings of God’s words, filled my soul once more. My spirit was being renewed and God had chosen this man to do so.

As I listened each morning as Jerry read from his Bible, I could feel his passion for God. I could see the love he had for Christ and how the Holy Spirit filled him. This man, I knew, was truly a man of God.

Returning home, still pondering Pastor Jerry’s lesson of the day, I opened my Bible. I wondered, who could truly be called a “Man of God.” This is what I found.

Blessed are those who fear the Lord,
who find great delight in his commands.

Their children will be mighty in the land;
the generation of the upright will be blessed.

Wealth and riches are in their houses,
and their righteousness endures forever.

Even in darkness light dawns for the upright, for those who are gracious and compassionate and righteous.

Good will come to those who are generous and lend freely,
who conduct their affairs with justice.

Surely the righteous will never be shaken;
they will be remembered forever.

They will have no fear of bad news;
their hearts are steadfast, trusting in the Lord.

Their hearts are secure, they will have no fear;
in the end they will look in triumph on their foes.

They have freely scattered their gifts to the poor,
their righteousness endures forever;
their horn will be lifted high in honor.

This, I knew, was what God was telling me about this man. This man I now knew as “Pastor Jerry.” His love for the Father, Son and Holy Spirit could not be mistaken, for this man… was truly a “Man of God.”

For sure, this is not the time to talk about me and my trials and tribulations. Most of you already know them anyway. Today though, I feel I would be remiss if I didn’t tell you this personal little story as it most certainly involves our dearly departed Pastor.

I lost one I loved to suicide (which I now call “The Beast”). This is probably the primary reason I “stumbled” as I mentioned above. Seeking relief from my sorrows, I joined an online group of similar people who suffered my pain.

I spent many days and nights crying to these people on the site…but, after hearing Pastor Jerry’s words so many times, I wrote these words (taken directly from the blog).

Good evening my family. I bring you warm wishes tonight and have a new story I would like to share. Something has recently happened which is, truly, taking me in another direction. Surely, I still grieve for her but I have found a new resource to help in my pain. It is my hope and prayer that, after reading my story, you understand and perhaps might consider a better kind of therapy as I have found.

For the past several Sundays, I have been attending a small, off-the-wall kind of church. It isn’t like the others around me. As a matter of fact, it isn’t like any I’ve been to before. This church, as small as it may be, is held out back, behind a bar. Strange, I know, but nonetheless it is clearly a church.

The Pastor is a scruffy man, with a long beard and pony-tail. You can tell from his words, he truly believes in what he is saying and the words he reads from his Bible

Without dragging out the details, let me get straight to my point. I FOUND GOD AGAIN! No, He certainly wasn’t the man on the raised platform, but the words bellowed out of this man as if God were speaking directly to me.

I remember a time when life was good and, in that time, I walked with God… every day! All that has happened, has taken me away but now, hearing His words again, I have found my way back to Him.

Then Peter got down out of the boat, walked on the water and came toward Jesus. But when he saw the wind, he was afraid and, beginning to sink, cried out, ‘Lord, save me!’

Immediately Jesus reached out his hand and caught him. ‘You of little faith,’ he said, ‘why did you doubt?’

The storm stirring around the boat became a distraction. Peter lost his focus on Jesus… and began to sink, but was quickly saved by his Lord as he, once again, called out to Him.

This little church, and it’s Pastor, have restored my focus on God, whom I had taken my sights off. Beginning this day, and into eternity, I will, once again, lay my eyes on Jesus Christ and not let the distractions of this world, nor my personal loss, let me lose sight of Him.

I have finally found some comfort. My prayer for all of you tonight is that you find “your Pastor” and “your church” just as I did and that, in making your way back to God, your pain and sorrows can be erased.

Praise God! I am on my way back!

This little story, is my personal tribute to Pastor Jerry for it was his voice, his reading of God’s word, that took me from Satan’s hands and back to my God. 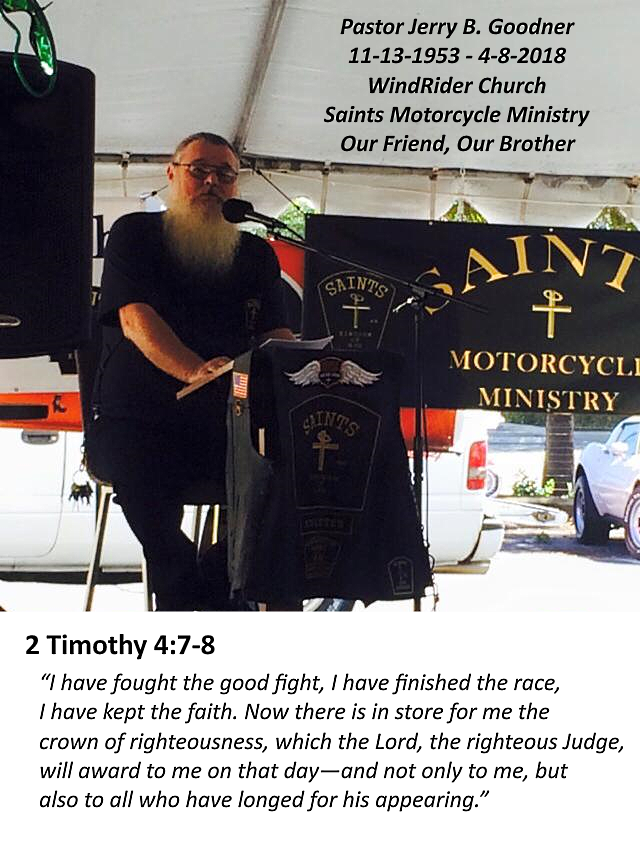 This man, my Brother in Christ, surely faced his battles. The trials and tribulations of this world beat him down, knocked him to his knees, yet still… he worshiped his God.

Even though I knew of his trials, I watched him. I saw as he continued to deliver the words of Our Lord, through any means he could.

He fought the battle with his shield raised high, his sword drawn… knowing, despite what this world might put him through, his God was standing there beside him.

I knew him. He didn’t give up. He fought the good fight, despite the odds, until that Saturday morning when his Lord in Heaven simply said, “Well done my child. Your battles are over and you have fought well. Now, it’s time to come home.” …and, once again, our Brother Jerry, heeded God’s command.

2 Timothy 4:7-8 – “I have fought the good fight, I have finished the race, I have kept the faith. Now there is in store for me the crown of righteousness, which the Lord, the righteous Judge, will award to me on that day—and not only to me, but also to all who have longed for his appearing.”

Jerry hasn’t left us… he just did what he’s always done and followed God’s command… “Come home!” …and, rest assured, he got up in a hurry! He didn’t take time to pack, wash his face and hands or brush his teeth. He couldn’t stop to say good-bye. His God called him home and Jerry, as we all knew he would, obeyed Him quickly and without question.

I understand your sadness. We can’t talk to him anymore. We can’t hear him singing karaoke or riding up to the church on his bike. Instead of tears of sorrow, let your tears rejoice in Jerry’s new home… in the Kingdom of The Father, sitting with the King of Kings and surrounded by Heaven’s armies of Angels where Evil cannot reach him any longer! He has found his peace.

Go with God; be good to one another; always stay humble; always be kind… God Bless!