This coming Tuesday marks the 241st birth of this great nation. A time for celebration of freedom and, as tradition would have it, more time among family and friends honoring our freedom.

History lesson… Who wrote the Declaration of Independence?

Although we know Thomas Jefferson as the true author, the Second Continental Congress initially appointed five people to draw up a declaration. The committee included Benjamin Franklin, John Adams, Roger Sherman, Robert Livingston and Thomas Jefferson. Jefferson was then given the task of writing a draft for the Declaration of Independence, which from June 11 to June 28 he worked on. Before he presented the Declaration to the Continental Congress, he showed it to John Adams and Benjamin Franklin; they made revisions. He presented the draft to Congress on July 1, 1776 and more revisions were made. On the fourth of July, the delegates met in what we know today as Independence Hall, but back then was known as the Pennsylvania State House, and approved the Declaration. John Hancock, the President of the Continental Congress signed the declaration along with Charles Thomson and it was sent to John Dunlap’s print shop for printing.

From the earliest times in our history, we have been built as “one nation under God.” Our forefathers created the foundation on which this great country began based on the lessons from our Lord and all His prophets. It is from their words that we have established this great land and, in most cases, how we continue to live our lives. 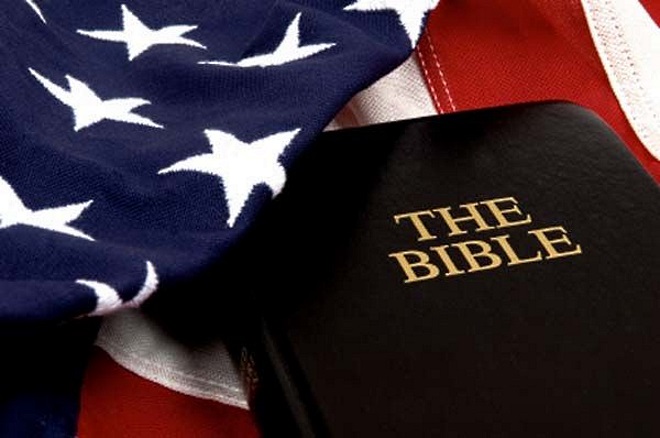 US History Quotes on God and the Bible

Since this nation’s inception, our foundations, laws and regulations as well as guidelines for how we behave as a nation have been based upon the writings in our Bible.

Reading the following quotes tells us, all too clearly, just how America was built upon God and Jesus Christ.

“It is the duty of all nations to acknowledge the providence of Almighty God, to obey His will, to be grateful for His benefits, and humbly to implore His protection and favor.”

“Of all the dispositions and habits which lead to political prosperity, religion and morality are indispensable.”

“We beseech [God] to pardon our national and other transgressions…” – George Washington, Thanksgiving Proclamation 1789

“The Declaration of Independence laid the cornerstone of human government upon the first precepts of Christianity.”

“I have examined all religions, and the result is that the Bible is the best book in the world.”

Samuel Adams – Signer of the Declaration of Independence

“I … [rely] upon the merits of Jesus Christ for a pardon of all my sins.”

“We have this day [Fourth of July] restored the Sovereign to whom all men ought to be obedient. He reigns in Heaven, and from the rising to the setting of the sun, let His Kingdom come.”

John Hancock – Signer of the Declaration of Independence

“…that all may bow to the scepter of our Lord Jesus Christ and that the whole Earth may be filled with his glory.”

What about the government? What did they have to say about the God and the Bible?

Congress printed a Bible for America and said:

We have struggled for our freedom

Freedom has not come easy in America. We still, to this day, have foreign enemies as well as those from within that continue to fight against all that we believe in. We should never lose sight of all those who fought these battles in order to turn our dreams into reality.

So many lives lost. So many soldiers dying to protect America and everything we believe in, but still, we prevailed. Why? Because we are a nation united under God and it is Him that provides us with victory as our motives are true and based on His lessons.

During the times of the civil war, Americans lost sight of God and focused on their own desires and wants over His. What was forgotten there?

James 4:1-2 – “Why do you fight and argue among yourselves? Isn’t it because of your sinful desires? They fight within you.  You want something, but you don’t have it. So you kill. You want what others have, but you can’t get what you want. So you argue and fight. You don’t have what you want, because you don’t ask God.”

In our struggles to unite this country, the civil war (1861-1865), there were approximately 700,000 people that died fighting for what they believed in… the right to own a slave and to have a more independent government… ruled by the state. Had we lost sight of God?

Solomon warned us in Proverbs 3:21-23 – “My son, never lose sight of God’s wisdom and knowledge: make decisions out of true wisdom, guard your good sense, and they will be life to your soul and fine jewelry around your neck. Then each one of your steps will land securely on your life’s journey, and you will not trip or fall.”

We truly mustn’t forget the principles on which this country was founded. While other factors have come into play, distracting us from our Godliness, it is important that we as Christians and children of God do our best to keep the traditions of this great nation alive as the Bible tells us how important our freedoms are…

What does the Bible tell us about freedom?

Galatians 5:1 – “It is for freedom that Christ has set us free. Stand firm, then, and do not let yourselves be burdened again by a yoke of slavery.”

Galatians 5:13 – “You, my brothers and sisters, were called to be free. But do not use your freedom to indulge the flesh; rather, serve one another humbly in love.”

…and what I feel is important to know this week

Psalm 33:12 – “Blessed is the nation whose God is the Lord, the people he chose for his inheritance.”

This is a great country. There can be no denying of that as the foundation upon which it was built is true, faithful and guided by God.

Celebrate the day, enjoy the time with family and friends but please don’t forget our roots, our history and our forefathers who built this land upon God’s word.

As children of God, enjoy your freedom but remind everyone you know how this is truly a gift from our Father.

Remember this… this day should not be about “God Bless America” but instead… “America, Bless God”

Go with God, be good to one another… always stay humble and kind!