The fishing boat is bobbing gently on the lake, a hundred yards offshore. Occasionally a wave slaps against its side though the lake is surprisingly still this morning.

Though it is very early, the six fishermen in the boat are stripped for work, the gleam of sweat on their backs just visible in the glow of dawn. All night they have put out their net, then pulled it in again, time after time. Time after time. They labor all night to earn a living. But not this night. This night they haven’t netted a single fish.

Dawn is upon them now, the sun just breaking above the hills east of Galilee. Their hopes of fish to sell are gone with the night. Maybe they should try another net or two before they quit. Maybe they’ll be lucky.

On shore, the sleepy village of Capernaum is beginning to stir. On its rocky beach the fishermen can see the glow of a small fire. Occasionally a breeze brings them the aroma of fish cooking. Peter’s stomach remembers its hunger, and his mouth can almost taste the savory fish.

Who’s tending the fire? It’s a man. Peter can see that much. He looks familiar, but Peter can’t place him.

Now the man brings up his hands and cups them about his mouth. A moment later his voice reaches the boat:

“Boys,” he shouts. “Put your nets out on the right side of the boat and you’ll find some….”

“Every landlubber thinks he’s an expert fisherman!” fumes Peter. But they are ready to put out the net again. Why not the right side this time? What do they have to lose?

All of a sudden, the stillness of morning is broken by the writhing of trapped fish and a tremendous tug on the net that, for a moment, threatens to capsize the boat. The men are instantly alert and position themselves to pull in the thrashing net. They must have caught a whole school of fish — on the right side of the boat!

Peter looks up from his exertion to the man on the shore. John, too, is straining to see him. “It’s the Lord!” shouts John. “It’s Jesus!”

The others are struggling with the net, but Peter doesn’t care. He grabs his clothes, dives into the lake, and swims with powerful strokes until the water is shallow enough for him to run splashing the rest of the way.

Dripping, he drops to his knees before Jesus — the risen Lord, the man he has spent three years following, emulating, serving. 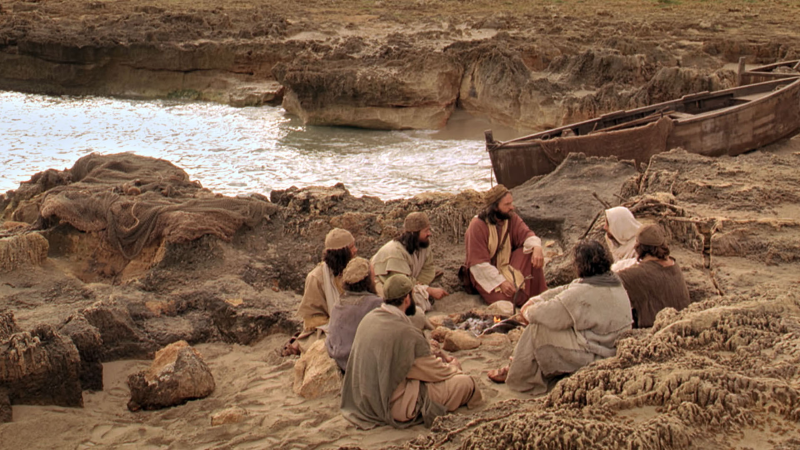 “Bring some more fish,” says Jesus. So, Peter runs to the boat, now nearly ashore, and helps haul in the net. They count 153 fish! Amazing!

Jesus calls to the men — disciples with whom he has shared many meals. “Come, have some breakfast!”

They squat around the fire and wolf down the bread and the fish Jesus has prepared. Hot fish! Hot bread after a long night’s work!

Fish and bread. Bread and fish. Why does this seem so familiar? Peter wonders. And then he recalls the day when, only a mile or two from here, Jesus had fed the 5,000 with five barley loaves and two fish and the 4,000 with seven loaves and three fish . Peter and these very men had carried basket after basket of fish and bread to the crowd until all were full.

Jesus, the great Feeder of men is feeding them again this morning.

Now Jesus calls him aside. “Do you love me Peter?”

With pain, Peter remembers how three times he had vehemently denied Jesus just before his crucifixion. He can hardly look Jesus in the eye. He mumbles, “Yes, Lord, you know that I love you.”

“Peter, feed my sheep,” says Jesus. Three times Jesus asked Peter to reaffirm his love — once for each time Peter had denied him. Three times Jesus reaffirms Peter’s call to ministry. Jesus not only forgives Peter, he restores him fully to his confidence.

Years ago, Jesus had told Peter and his colleagues, “I will make you fishers of men.” Sure enough — together they had ministered to many thousands of men and women, boys and girls on what amounted to a three-year spiritual fishing expedition.

Not physical food. Jesus is talking about spiritual food — teaching, praying, leading, exhorting, serving. Jesus is asking for Peter’s love, but with that love, obedience too.

Peter knows what he’s saying. Jesus had once described the crowds as harassed and helpless, like sheep without a shepherd.

“Yes, I love you, Jesus,” says Peter clearly, lifting his eyes to meet the Master’s.

“Yes, Lord, of course I will,” whispers Peter, as his eyes flood with tears. “You can count on me.”