A Tribute
(quotes from Billy Graham)

William Franklin Graham Jr. was born November 7th, 1918, ordained a Southern Baptist minister… eventually becoming known internationally after 1949. He has been looked on as one of the most influential preachers of the 20th century.

He held large indoor and outdoor rallies with sermons that were broadcast on both radio and television… some being re-broadcasted today. In his six decades of television, Graham hosted annual Billy Graham Crusades, which ran from 1947 until his retirement in 2005.

There can be no doubt he was a true man of God as his messages touched millions of lives bringing strength to the weak, Love into the hearts of the heartless and faith back to those fallen from grace.

Billy Graham died this past Wednesday, February 21th at the age of 99. I wanted to take just a short while today to pay tribute to Billy Graham and provide you with some of the greatest quotes from his ministry. 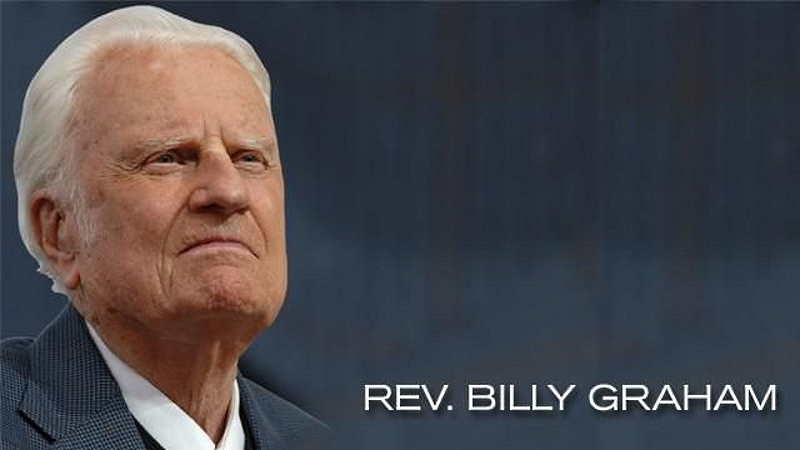 Being a Christian is more than just an instantaneous conversion – it is a daily process whereby you grow to be more and more like Christ.

No arguments here. We know here at Sunrise Chapel that Christianity is a full-time responsibility. It should be our jobs, every day to become more like Christ.

Courage is contagious. When a brave man takes a stand, the spines of others are stiffened.

Prayer is simply a two-way conversation between you and God.

How many times have we talked about that? Nothing more, nothing less… it’s between us and God.

We are who we are, Brothers and Sisters of Christ. This is our character and if this is lost… all is lost.

This definitely fits in with the ride that is scheduled for today. I suspect many tears will be lost and, with that, there will be a great power among us.

There is nothing wrong with men possessing riches. The wrong comes when riches possess men.

I think his message is clear here. It is not wrong to have wealth if you’ve worked hard but don’t let the money possess us.

The framers of our Constitution meant we were to have freedom of religion, not freedom from religion.

The greatest form of praise is the sound of consecrated feet seeking out the lost and helpless.

God proved His love on the Cross. When Christ hung, and bled, and died, it was God saying to the world, ‘I love you.’

This one is important to me as it reminds me not only of John 3:16 but the great sacrifice God made for us to show His unconditional Love.

It often bothers me in times of sadness and loss such as the recent events in Parkland when people say, “God doesn’t understand… He doesn’t know what it’s like!” How wrong that statement is…

God sat in His Kingdom watching people, just like you and me, beating His Son, spitting on Him and berating him publicly and then thrashing him with a Roman Cat-o-Nine tails.  After all of this torture, they then nailed him to a cross of wood and watched Him die for us.. mocking Him until His last breath! God TRULY understands.

God is more interested in your future and your relationships than you are.

The men who followed Him were unique in their generation. They turned the world upside down because their hearts had been turned right side up. The world has never been the same.

Clearly, he was talking about the Apostles here. Jesus had set their paths in the right direction and they, according to His teachings and His will, went out into this world and tried to do the same for all of us.

You’re born. You suffer. You die. Fortunately, there’s a loophole.

The only time my prayers are never answered is on the golf course.

A little Christian humor there huh?

He is talking about us here. Remember we once said, “Sometimes, we are the only Bible that people will ever read?” Good to remember!

It is not the body’s posture, but the heart’s attitude that counts when we pray.

I think Billy was saying here that we don’t always have to “hit our knees” to pray. God hears us from wherever we are and whatever position we may be in.

The highest form of worship is the worship of unselfish Christian service.

Suppose you could gain everything in the whole world, and lost your soul. Was it worth it?

God has given us two hands, one to receive with and the other to give with.

Good to remember… always give back when you are given.

I’ve read the last page of the Bible. It’s all going to turn out all right.

Does anyone know what the last page of the Bible is? Please give me one more moment and I tell you what Billy Graham is talking about with this quote…

The River of Life

“Then the angel showed me the river of the water of life, bright as crystal, flowing from the throne of God and of the Lamb through the middle of the street of the city; also, on either side of the river, the tree of life with its twelve kinds of fruit, yielding its fruit each month. The leaves of the tree were for the healing of the nations. No longer will there be anything accursed, but the throne of God and of the Lamb will be in it, and his servants will worship him. They will see his face, and his name will be on their foreheads. And night will be no more. They will need no light of lamp or sun, for the Lord God will be their light, and they will reign forever and ever.”

“And he said to me, ‘These words are trustworthy and true. And the Lord, the God of the spirits of the prophets, has sent his angel to show his servants what must soon take place.’

‘And behold, I am coming soon. Blessed is the one who keeps the words of the prophecy of this book.’

‘I, John, am the one who heard and saw these things. And when I heard and saw them, I fell down to worship at the feet of the angel who showed them to me, but he said to me, “You must not do that! I am a fellow servant with you and your brothers the prophets, and with those who keep the words of this book. Worship God.”

And he said to me, ‘Do not seal up the words of the prophecy of this book, for the time is near. Let the evildoer still do evil, and the filthy still be filthy, and the righteous still do right, and the holy still be holy.’

‘Behold, I am coming soon, bringing my recompense with me, to repay each one for what he has done. I am the Alpha and the Omega, the first and the last, the beginning and the end.’

Blessed are those who wash their robes, so that they may have the right to the tree of life and that they may enter the city by the gates. Outside are the dogs and sorcerers and the sexually immoral and murderers and idolaters, and everyone who loves and practices falsehood.

‘I, Jesus, have sent my angel to testify to you about these things for the churches. I am the root and the descendant of David, the bright morning star.’

He who testifies to these things says, ‘Surely I am coming soon.’ Amen. Come, Lord Jesus!

The grace of the Lord Jesus be with all. Amen.

God Bless you Billy Graham and God Bless all of you!

Go with God; be good to one another; always stay humble; always be kind… God Bless!