A young coed, Emily, attending college in a New York University was studying one night at the campus library with a fellow student. They each had major exams coming up and wanted to do their very best as they were nearing the end of the semester.

After hours of studying, Emily finally took a break to grab a cup of coffee from the machine in the hallway. She dropped her quarters in the machine and watched wearily as the machine dribbled muddy-looking water into the tiny little cup. Nonetheless, she was tired and needed a pick-me-up.

As she took her first sip, she glanced down at her watch and noticed it was nearly midnight. Not thinking too much of it, she finished her muddy water and headed back to the library. When she got back, she noticed her friend had already left. Now she began to be concerned. Nearly midnight and Emily had no ride back to her run-down little apartment in the city.

She decided, even though she was a little leery about the journey home, she really had to go. She packed-up her things and starting walking down the long hallway to the front entrance of the building. As she walked, she passed by what looked like a little campus church. It was dimly lit but had a nice little altar at the front of the room. 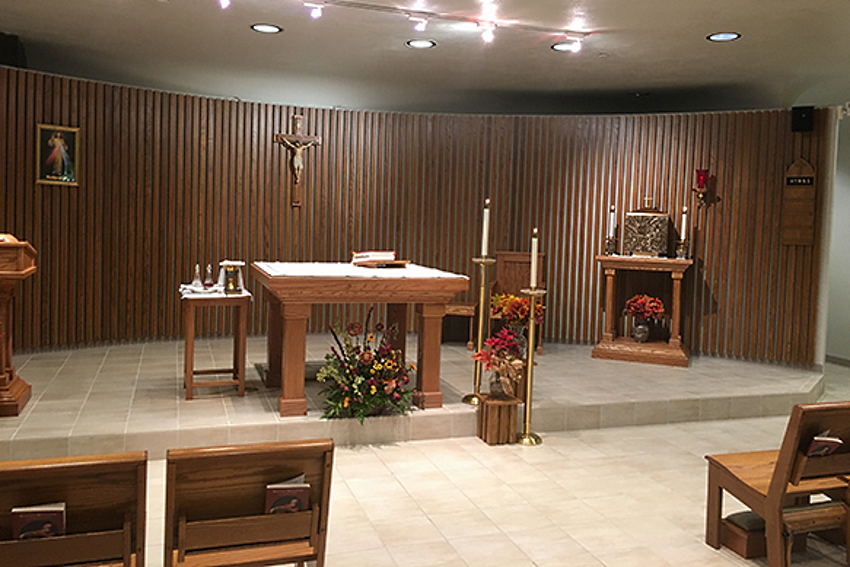 Emily decided it might be a good idea to say a little prayer before heading for home. She had always believed in God and attended church regularly as a little girl. Somehow, she had gotten away from Him as she entered into the busiest part of her young life.

She put her things on a pew near the front and knelt-down at the altar to pray. She clasped her hands to together, bowed her head and closed her eyes. “Dear Father in Heaven, I know it’s been a while, but I know you understand how busy I’ve been with my studies. Lord, it’s really dark outside and I’m a little frightened about my walk home. Please protect me on my journey and keep me safe from harm. I thank you for all I’ve been given and have faith that you will protect me tonight. I ask this of you in the name of your Son, Jesus… Amen”

Oddly, to Emily, she actually felt a little more at ease after saying her little prayer. She gathered her things and headed, once again, towards the front entrance.

It was a little chilly outside so Emily flipped-up the hood on her sweatshirt and began her walk home. Almost there, she came upon the gate to the alley leading to her apartment. She unlatched the hasp and the gate, desperately in need of oiling, squeaked open allowing her access to the alley.

It was pretty dark down that stretch and she felt a little tingly knowing this wasn’t the smartest thing she’d done lately. Making matters worse, she saw a dark figure lurking near one of the dumpsters. He appeared to be leaning against the wall smoking a cigarette with one foot on the wall and his head tilted down.

“Lord,” she said as she kissed the cross hanging around her neck, “I believe in you!” She then proceeded to walk down the 30-40 feet to her building’s door. Phew, she made it and ran up the stairs, opened her apartment door, darted inside and quickly closed and locked the door behind her.

The next morning, she rose early and started the morning coffee. Surely, this would be better than the muddy water she drank last night at school. While she waited, she switched on the TV and began watching the news.

Catching her attention was a story about a violent attack that had happened just last night. As she watched intently, they reported the time and location of the incident. “Oh no… that’s my apartment building!” She watched further. The report indicated they had someone in custody but needed eye-witnesses to help them with the case.

She knew she had to do something, so she immediately called the police station and told them of what she had seen last night. They asked her if she thought she could identify the suspect. She said, “well, it was a little dark, but I think I can.” They asked that she come down as soon as she could.

Gathering her things for school, she made her way downtown to the local precinct and approached the front desk. After identifying herself, the clerk led her down a hallway to a dark room with a large window in the front. Clearly, this was where witnesses identify suspects as she could see the little “stage” and markings on the wall indicating the height of each suspect.

The officers led a few people onto the platform and had them all face forward. The officer with Emily then asked, “Do any of these men look familiar?” “Yes,” she said almost immediately! “That man right there… I recognize that jacket and hat. That is definitely the same person I saw last night in the alley.”

The officer thanked her for her cooperation and asked that she wait just a few more minutes so they could notate her statement.

After only a short while, the officer returned and said, “It’s okay Emily. When we questioned the suspect, he broke-down and immediately confessed to everything. You’re free to go.”

Out of curiosity, Emily asked the officer, “Do you mind if I ask you a favor?” The office replied, “Of course, what can we do for you?”

Emily then asked them to question the suspect why he didn’t attack her that night in the alley. She was alone and only a tiny little woman. Why did he not assault her?

After only a few moments, the officer returned. “Well Emily, according to the suspect, there were 4 or 5 large men in dark clothing walking behind and beside you. He afraid of them and left you alone.”

At that point, Emily knew. She dropped to her knees right there in the station, began to cry, and gave thanks to her Father in Heaven!